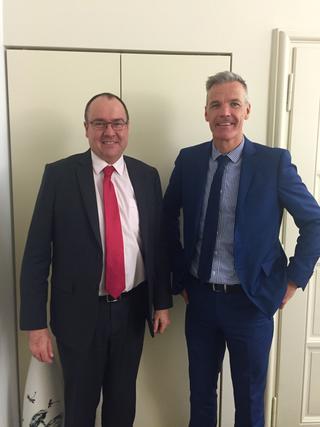 This week farm representatives from Argentina, Brazil, Canada, NZ and Australia will meet to lead a fresh pitch for major agricultural trade reform during a meeting of the Cairns Group Farm Leaders in Geneva.

The Cairns Group Farm Leaders drive the agenda to prosecute the three pillars of global trade:

- the removal of export subsidies;

These pillars are as important now as they ever were given the geo-political developments we have seen this week with the election of Donald Trump as president of the USA.

The Cairns Group Farm Leaders will meet today as part of the 30th anniversary celebrations of the formation of the Cairns Group. Farmers rely on open, fair and growing markets ahead of the next WTO Ministerial Meeting in Buenos Aires in 2017. Governments are in a position to make real change to the trade of agricultural goods in Buenos Aires and it is crucial to ensure that the voice of the farmers is heard ahead of that meeting.

Reform of agricultural trade support measures is a major focus. While much has been achieved through bilateral trade agreements, the elimination of export and domestic support measures, distorting global markets, can only be addressed through the World Trade Organisation. For this reason, the Cairns Group Farm Leaders are amplifying and articulating these views to government and industry stakeholders. The issues of liberalising markets and removing unfair assistance is too important to be ignored. It is incumbent on the farm leaders to compliment the activities of government and to communicate and demonstrate the impact measures such as domestic farm assistance measures continue to have on industry.

In 2015 the share of world cotton production receiving direct government assistance, including direct payments, subsidies and border protection, was 71%. This means that almost three quarters of the total global production of cotton was getting significant government subsidies. While farmers in countries such as Australia only receive around 1.3% of their gross farm revenue through government support measures, farmers from the US, EU and Japan receive up to 40% of their income from government support measures. This leads to distorted competition in the global market place.

By acting collectively, we, the Cairns Group Farm Leaders, can have more influence and impact on the agriculture negotiations than we could have independently.

To this end, Tony Mahar, the Australian representative of the Cairns Group Farm Leaders, had meetings this week with WTO representatives such as Tim Yeend, the Principal Advisor to the Director General of the WTO. Tim was very clear in his feedback on the huge value in hearing from industry and farmers on how decisions made in Geneva impact on the real world. It is important to ensure that the Cairns Group Farm Leaders have a collegiate and common approach to domestic farm support measures, otherwise our voice get lost.

Tony will also address a WTO meeting with more than 100 attendees from the WTO bureaucracy and WTO member countries to outline the difficulties farmers from Cairns Group countries face when exporting their produce to countries that heavily support their farmers financially.

The message provided by Cairns Group Farm Leaders is loud and clear: Do not retreat to the comfort of protectionism. We must adopt an agenda, focussing on serious reforms to trade rules to stimulate a vibrant and sustainable agriculture sector. Farmers need improved market access as well as the removal of unfair domestic farm subsidies to grow and remain profitable. There are wins all round if we can do it – lets get on with it and create a level playing field.