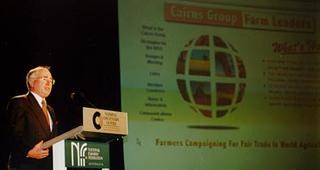 A new Internet website, which links all of the farm organisations within the 15* Cairns Group of countries was launched in Canberra today by the Prime Minister, John Howard.

"World agricultural trade barriers are estimated to cost Australia around $10 billion a year, which averages $1300 per year for each Australian household. As Chair of the Cairns Group, Australia is determined to secure meaningful reform through the agriculture negotiations in the World Trade Organisation, due to begin in Geneva next year", Mr Donges said.

"The website will play an important role in lobbying the world about the need to reduce protection in agriculture, which is the most distorted sector of international trade", he said.

"It will provide a forum for joint documents, statements, press releases and policy positions, a weekly report from our listening post in Washington and links with all other websites around the world".

"An initiative of NFF, we envisage the website to be active for as long as it takes to achieve change in agricultural trade", Mr Donges said.

"Australia is ideally suited to lead the trade liberalisation debate, not only because we took a prime lead in the Uruguay Round, but because we stand to capture a large share of the gains", he said.

"The Cairns Group website will be the public face of its individual farm organisations throughout the forthcoming negotiations".

Next Media Releas:
1/9/1999 An important message from Cairns Group Farmers on the need for liberalisation of world agricultural trade