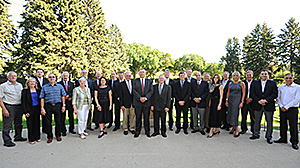 After 10 years of negotiations, farm leaders are extremely disappointed with the lack of progress in the Doha Development Round. Farm leaders recognize that significant differences in members' negotiating positions remain that need to be addressed if the Doha Round is to be successful.

Farm Leaders call upon world leaders to demonstrate the political will and responsibility required to find common ground, while encouraging and supporting Cairns Group Minsters to re‐focus their efforts in bringing the Doha Development Round to a successful conclusion.

Farm Leaders are open to Cairns Group Ministers exploring new ways of delivering a multilateral trade liberalization outcome, but will not support a lowering of ambition under any alternative mechanism.

The WTO and its members must learn from the past decade and reengineer the negotiations to produce an ambitious and comprehensive agreement that delivers positive outcomes for farmers. In addition to locking in previous commitments including the removal of export subsidies, substantial progress must still be made across all three pillars within the Doha Development Round ‐ market access, export competition and domestic support. From our perspective this necessitates finalization of modalities which deliver freer trade in agriculture goods. Farm Leaders also urge Cairns Group Ministers to look at ways to arrest the increasing use of non‐tariff trade barriers and to ensure adherence to science‐based decision making.

Farm Leaders recognize that the economic troubles that now plague parts of the global economy highlight the contribution that misguided domestic agricultural policies have on distorting trade and depressing global farm incomes. Agriculture must remain a central focus of the Doha Development Round, particularly as food security concerns escalate across the globe. In this context, the recent meeting of G20 Agriculture Ministers correctly acknowledged that international trade under a rules‐based system is an important component of addressing the problem of food security. Farm Leaders agree with the Ministers' statement that "A stable, predictable, distortion free and transparent system for trade allows the unrestricted flow of food and agricultural commodities, contributing to food security."

Farm Leaders call upon Cairns Group Ministers to commit to reaching a comprehensive agreement which accounts for global food security needs and other measures consistent with Article 20 of the WTO Agriculture Agreement.

Despite the difficulties with the Doha Round, the WTO remains a critical institution. Farm Leaders note that multilateral liberalization has the greatest potential benefits for the world's farmers and consumers and Ministers must renew their commitment to the multilateral reform process as their priority. While Farm Leaders support trade liberalization, bilateral and regional trade negotiations must not be seen as a substitute for multilateral reform through the WTO.

Farm Leaders strongly advocate that Cairns Group Ministers pursue engagement across the broader WTO membership with the aim of mobilizing leaders to action on a new Doha work plan in the lead up to this December's WTO Ministerial Meeting.

Farm Leaders demand that the WTO December Ministerial place emphasis on defining specific steps to refocus the Doha Development Round agenda and set immutable timetables for the successful completion of the round according to the level of ambition established in its mandate.